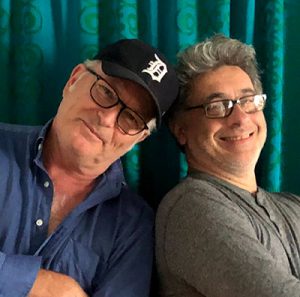 D.Foe are Rob Clydesdale and Mark Daniels who were both founding members of music collectives that were the pioneering forces behind acid jazz, trip-hop and big beat back in the 90’s.  Since then they’ve established the D.Foe name in the top rung of British composers with their scores for both series of the Sky/Dark Harbor Stories Intelligence, starring David Schwimmer and Nick Mohammed and additional music for the Idris Elba Netflix series Turn Up Charlie.

Rob and Mark first worked together 15 years ago on a project for Nokia sampling a voice-over by Harry Dean Stanton recorded for a Nokia tv commercial, and used it to create a No 1 single in the dance charts which became an integral part of Nokia’s N95 advertising campaign.

They’ve provided music for games including Gran Turismo Sport, a Channel 4 ident, and commissions for ITV’s Wonderful You, and Terry & John, BBC’s Armstrong & Miller, BBC2’s The Viewing Room and their extensive production music library has been featured in programmes and series across all the main UK channels.

Mark was among the first artists/producers to scratch, sample and loop, mixing the DIY attitude of punk, the freedom of jazz, hip hop beats and dub roots while Rob is an all-round musician and a virtuoso guitarist who cut his creative teeth on experimental rock and funk. They’ve collaborated with a diverse collection of leading talent including David Bowie, Pete Shelly, Grand Master Flash, Viv Stanshall, Ian Drury, Brian Auger, Mad Professor, and Brand New Heavies.

They have both released several singles and albums under their own names and together as D.Foe as well.  Ramrock Records are shortly to release a D.Foe EP written and performed by them with an album to follow.