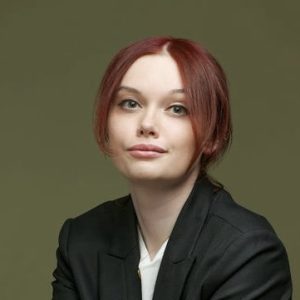 Aurélie Webb is a British composer working in London and the US. Specialising in scores for film and live performance, her eclectic, original yet accessible work bears the influence of music as wide-ranging as American minimalism and Ralph Vaughan Williams, Radiohead and David Bowie.

Aurélie has worked with filmmakers and artists from across the world, branching into animation, documentaries and podcast music as well as experimental dance. In 2022 Aurélie completed work on her original score for the hit mystery drama podcast What Happened In Skinner which was nominated for the Best Indie Podcast award at The Ambies, the awards for excellence in audio.

In 2021 she was delighted to be invited by ASCAP to sit on the panel of the 2021 ASCAP Experience Scoring for Superheroes panel with Lorne Balfe and later that year was interviewed by the Alliance for Women Film Composers on her work as a composer.

She was selected for the 2020 ASCAP Columbia University Film Scoring Workshop and the BMI Composing for the Screen Workshop. Following its Manhattan premiere in March 2019, Consonance, a collaboration with choreographer Chaery Moon with original score by Aurélie, was selected to be performed at the Dumbo Dance Festival, Brooklyn and at the Your Move Modern Dance Festival, New Jersey. The animated film Today We Are, scored by Aurélie, received Honourable Mention at the Fusion Film Festival and was a finalist at the New Visions and Voices Festival, ASIFA Festival and the Dublin International Film Festival.

Aurélie has recently completely work on the documentary Here To Stay which covers the political campaign of Giselle Martinez as she becomes a council member for the City of Newburgh, and Mars Falling, a sci-fi short by Good Bear Films.  Upcoming releases in 2022 include her orchestral piece Nova, recorded with the Trackdown Studios orchestra in Sydney, and her official original score for What Happened In Skinner.