EQUINOX PUBLISH JOHN ALTMAN’S RIVETING AUTOBIOGRAPHY HIDDEN MAN: MY MANY MUSICAL LIVES FEBRUARY 15 AND HE’S LINED UP FOR MAJOR PUBLICITY ACROSS ALL MEDIA.

Film composer, arranger, orchestrator, conductor and acclaimed sax player. Everyone knows his music but not so many his name. 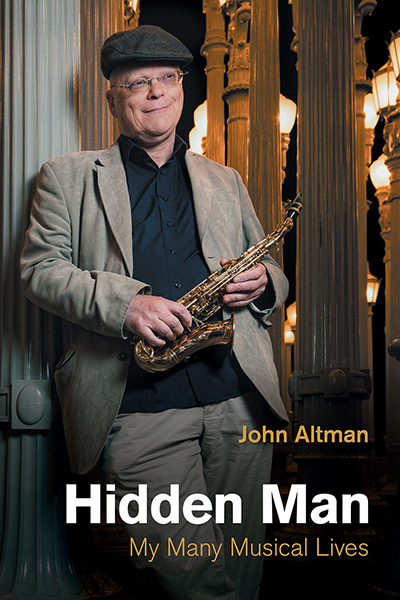 In this vivid account of over fifty years in the world of popular music, Altman explains why he is the ‘Hidden Man’, whose scores include such well-known film sequences as ‘Always Look on the Bright Side of Life’ from Life of Brian, which he arranged, conducted and whistled; the tank chase through St. Petersburg in the James Bond movie Goldeneye and the ship sinking in Titanic, with the orchestra playing on deck.

In all, he has composed the music for over 50 movies, winning a Bafta and an Emmy and many Nominations. His orchestrations can be heard in film scores by legends like Elmer Bernstein and Jule Styne, and he was musical director for several television series, notably Miss Marple, starring Joan Hickson, as well as Peak Practice, in which his music can be heard in every episode.

His television and recording work included all the arrangements for the Grammy-nominated Ruttles, and there are plenty of stories of his half-century of collaboration with members of the Monty Python team, and Neil Innes. As an arranger/conductor he has worked on hit records for numerous stars, among them Rod Stewart, George Michael, Tina Turner, Barry White, Diana Ross, Björk, and Alison Moyet.

As a saxophonist, flautist and clarinet player he has performed with an equally stellar list of musicians, and the book includes many tales of life on the road during his early days with Hot Chocolate and Van Morrison.

In this entertaining, fast-paced memoir you will discover how Ingrid Bergman smiled at his back; how a Beatle always greeted him by singing one of his musical phrases; how he reduced Freddy Mercury to helpless laughter; how he got Pierce Brosnan his big movie break; how he sat with Charlie Chaplin watching a movie that hadn’t been seen for a quarter of a century (with a running commentary from the great man himself); how he sang over a mobile phone to James Cameron and the cast of Titanic; how he inspired a five-year-old George Michael to become a musician; and how Tina Turner made him a cup of tea. One of the most poignant parts of the story is how he mentored the young Amy Winehouse, but she is just one of the many dazzling musicians who have worked alongside the Hidden Man.