“THE INNOCENTS”, SCORED BY PESSI LEVANTO, HAS OPENED IN THE US TO RAPTUROUS APPLAUSE. IT OPENS IN THE UK MAY 20.

The movie has been featured LA Times, Guardian, Herald Tribune, Vogue, Boston Herald and countless genre-film websites, plus selected as the Critic’s Pick in NY Times

#THEINNOCENTS directed by Eskil Vogt and scored by the incredible Pessi Levanto, is now playing in selected theatres in the US, AND releasing in the UK on May 20th!

“ …… absolutely brilliant filmmaking. I’ve never seen a movie where paranormal abilities were rendered so believable, and so terrifying…..  I doubt if I will see another film so successful on all levels this year. Sinister and completely absorbing.” 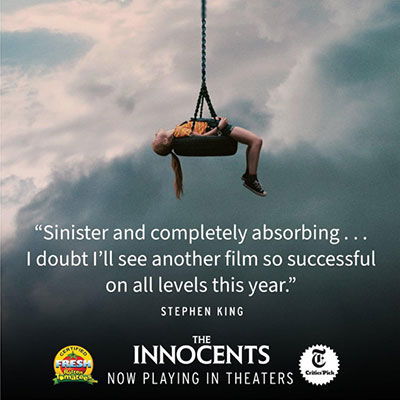 Selection of some of the reviews for The Innocent:

‘an emotional and affecting tale of the perils of childhood and gives a whole new meaning to the term growing pains. The Innocents is a confronting and complex film that deserves to be seen by as many as are brave enough.’ (4 stars)  Hollywood News

‘The Innocents is one of the best films of the year so far.’  Sydney Morning Herald

‘The babes in the woods of Eskil Vogt’s “The Innocents” are some of the scariest kids you’ll see on a movie screen this year.’ LA Times

‘A powerful and provocative take on sinister children and superpowers… The entire film picks apart a child’s understanding of the world with subtlety, menacing intensity and an intelligence that gets deep under the skin.’ (5 stars)  Sci-fi Now