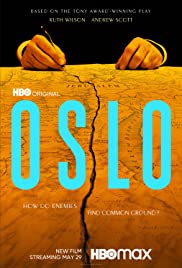 Oslo is an upcoming American television drama film directed by Bartlett Sher and written by J. T. Rogers, based on Rogers’ play of the same name based on a true story.

It stars Andrew Scott, Ruth Wilson and Jeff Wilbusch. Steven Spielberg is one of the Executive Producers.